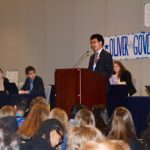 JSA has wrapped up its final convention of the school year, naming its Statespersons of the Year and Chapter of the Year. In addition, JSA members collectively supporting more than 50 issues in the affirmative. This year at Spring State, JSA members across its 10 states passed legislation that spanned the political spectrum. Among the issues that students supported was implementing a universal basic income, the GOP tax plan, use of private prisons harms the integrity of the justice system, and abolishing presidential term limits.

Each JSA state elected a new governor and lieutenant governor. As the top leaders for their JSA state, these individuals will be responsible for their state budget, managing a team of other student leaders, and starting new Chapters in their state. Meet our new elected officers.

Additionally, students also held a Mock Supreme court hearing in the case of Masterpiece Cake Shop vs. Colorado Civil Rights Commission. The case offered students a chance to debate the whether a business is protected under the First Amendment.

Statesperson of the Year

Chapter of the Year

Chapter of the Year - The Overlake School

A tradition at JSA conventions is the selection of a Best Speaker from each debate. This student exemplifies confidence, well-articulated argument, and captivating responses to their opponent. The Best Speaker is selected by other students in the debate. Congratulations to our Spring State Best Speakers.