The JSA campus staff welcomed 203 students to the Georgetown University campus, kicking off the program with an orientation and the first chapter meeting where they recapped the day. Participants had an opportunity to meet other students assigned to their chapter (other students who live in their hall and share the same Resident Advisor) and their Resident Advisor (RA), adult chaperones who work closely with groups of students throughout the program.

Meanwhile, our Summer School at Stanford University started July 8 with 117 students. These students are participating in their first week of classes following orientation and some bonding activities with their cohorts and Resident Advisors. 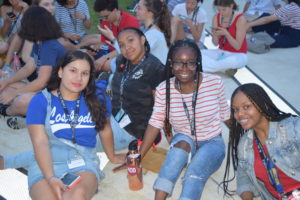 On the Georgetown campus, bright and early on Monday morning students were off to classes and Debate Workshop, where participants converse and challenge each other on a collection of hot-button topics such as gun control and safety in schools, the electoral college, and whether Russia poses more of a threat to national security than the Middle East. On Wednesday, we took a break from evening classes and celebrated July Fourth watching fireworks over the National Mall. The week whizzed by with classes, debates, and developing friendships.

On Friday, the students attended their first Speakers’ Day with a visit to the U.S. State Department. There, an informed and engaging group of speakers talked with the students about a range of topics. Speakers included Michael Alpern, head of the Office of Press and Public Diplomacy at the Bureau of International Narcotics and Law Enforcement Affairs; Teeta Manson, deputy director and public affairs officer at the Bureau of Conflict and Stabilization Operations; Robert Raines, deputy director for Press and Communications at the Bureau of Near Eastern Affairs; and Faizal Khan with Human Resources and Recruitment. 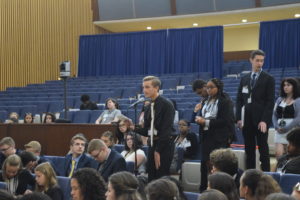 Students asked speakers a variety of questions, ranging from the opioid crisis to conflict in Israel, the role of social media in the State Department’s work, and educational and internship opportunities for high school students.

Andrew Tull of Pullman, Washington, asked Alpern “In your experience, is the current opioid crisis worse or not as bad as past drug crises?”

“Unfortunately, it is an easy question, it's worse,” Alpern responded. “The actual overdose death numbers are worse than what we saw in the ‘80s and ‘90s with cocaine, or in the ‘70s with heroin,” Alpern explained that a key difference is the addition of synthetic opioids such as fentanyl being cut into drugs and those using it not even being aware often that a synthetic is in the drugs.

“We see that cocaine overdose deaths have skyrocketed and gone up 80% in the U.S. in the last two years,” said Alpern. “It’s a really difficult problem. The overdose rates are increasing every year, hopefully, that the curve is going down.” He lamented the spread of it as a global problem with countries like Canada, Estonia and the United Kingdom facing similar grim statistics.

One week in, students took their midterms on Saturday morning and began their first set of main debates. They also enjoyed a patriotically themed dance and a showing of the film, Moana. Many students explored Washington DC in small groups on their first free day. Students visited museums, restaurants, the national mall, and did a little bit of shopping on M Street.