John Absher joined the JSA Board of Trustees in 2017.

Who first told you about JSA? 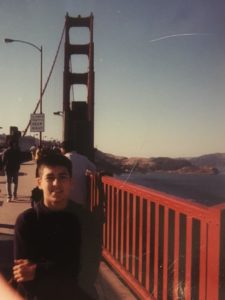 If you could have lunch with any elected figure, living or dead, whom would you choose and what would you want served for lunch?

I would love to have lunch with former President Barack Obama. I’d just want simple Mexican sandwiches and a chat.

What is your favorite political movie and how many times have you watched it?

My favorite political movie is The Distinguished Gentleman with Eddie Murphy. I’ve probably seen it six times. The first time I watched it I only saw the second two-thirds of the film. I liked what I saw so much that I told my High School AP Euro teacher that we should watch the film. Anyone who has seen it and is reading this has realized that the movie opens with an act of indiscretion between a US Senator (played by Eddie Murphy) and his assistant. Murphy’s character suffers a heart attack during the act of indiscretion. There I was in my AP Euro class with everyone looking at me asking why I had recommended such a racy film. I said, ‘just wait.”

What is objectively the worst pizza topping?

If you had to give up google, your cell phone or chocolate, which would you choose?

Do you have a favorite JSA memory or JSA story that sticks with you (that can be repeated to a wide audience)?

One experience I remember vividly was breathing the morning air at Stanford Summer School. Coming from Eastern Kentucky, I had never experienced weather like California’s in my life. That feeling of the California morning air always stuck with me. I gave the commencement speech at Stanford Summer School. I was so little that they had made a stack of books for me to stand on so that I was tall enough to see over the podium.

If you could pick a person working in a field other than politics and instantly make him or her President of the United States today, who would it be and why?

Bill Gates, based on the work he has done with the Bill and Melinda Gates Foundation. He’s a smart, thoughtful, big thinker. Republican or Democratic, those are the skills I’d like to see in the White House at any given time. He has the right kind and the right amount of experience. I’d be pretty happy with Warren Buffet too.

Chuck the Electoral College? Yes or No?

Multiple Choice. What did you do with your JSA best speaker gavels? 1. Sold them on Ebay. 2. Put them in a box in the garage. 3. Display them to this day on the mantle. 4. My mother has them.

I wasn’t in the school year program, just at the two summer schools, Stanford and Princeton. As a result, I have absolutely no best speaker gavels.

What legacy that started with JSA carries on with you to this day?

I think the legacy that sticks with me the most is understanding that people really do see the world in different ways, and that means that we have to make an extra effort to get along with each other.

Why is JSA Unique?

From the perspective of the summer programs, I think it is the people that it brings together. It is a unique idea and a unique execution of the idea.