Dan Germain joined the JSA Board of Directors in 2005. He served as a Director for 10 years. After a brief break, Dan joined the Board of Trustees in 2017.

Who first told you about JSA? 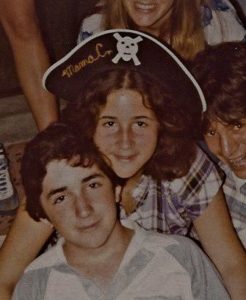 It was likely my brother Greg. I learned about it in 9th grade. In the late 1970s the Junior State Chapter at Taft High School in the San Fernando Valley was very big and strong and it included people like Andy Seagal, Amy Scharff and others. In order to create more members for their chapter they decided to reach out to the junior high school that fed into Taft. In the fall of 1977 the Taft High Schoolers came to Portola Junior High and encouraged a group of kids to start a Junior High Chapter of Junior State. That Junior High Chapter included me, James Lee, Andrea Scharff, Robbie Koltai, Robert Meyers, Ethan Feerst, Eric Rhoden and a number of others. All of us became very involved in JSA immediately. The Portola 9th graders went to a variety of high schools (not just Taft) and started chapters at the other Valley schools. It was a special group of kids who all went on to be leaders in JSA.

If you could have lunch with any elected figure, living or dead, whom would you choose and what would you want served for lunch?

What is your favorite political movie and how many times have you watched it?

The Candidate with Robert Redford. Four or five times.

What is objectively the worst pizza topping?

If you had to give up google, your cell phone or chocolate, which would you choose?

Do you have a favorite JSA memory or JSA story that sticks with you (that can be repeated to a wide audience)?

The Election of Jay Berinstein to JSA Governor. It was my first Spring State Convention. Jay was such an amazing dynamic leader. I loved the whole election process. It was so exciting. I worked on Jay’s campaign. The excitement of the election sticks with me to this day.

If you could pick a person working in a field other than politics and instantly make him or her President of the United States today, who would it be and why?

Stephen Breyer. I think he’s brilliant, funny, sophisticated, pragmatic – everything that our current President is not.

Chuck the Electoral College? Yes or No? Yes.

Multiple Choice. What did you do with your JSA best speaker gavels? 1. Sold them on Ebay. 2. Put them in a box in the garage. 3. Display them to this day on the mantle. 4. My mother has them.

I threw them out ages ago.

What legacy that started with JSA carries on with you to this day?

Reading the newspaper everyday. I got that habit from watching Richard Prosser. It’s still a habit of mine.

Why is JSA Unique?

It’s student run. It encourages civic engagement among young people. It prepares young people to be active, engaged citizens in a democratic society.